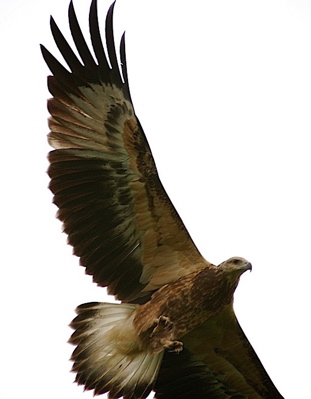 K.C. Tsang, an avid birder and photographer, was walking along a grassy area in Ponggol when a juvenile White-bellied Sea Eagle (Haliaeetus leucogaster) (also known as White-bellied Fish-Eagle), decided to check on him. In KC’s very words: “From high above it swooped down. Lucky for me I noticed what the fellow was doing, pointed the camera at it, it did an air-braking action, its talons already extended.”

KC did manage to get one dramatic shot of the bird as it was coming at him, as shown here, uncropped! I suppose it was worth the excitement and the risk of losing his baseball cap. But was the bird aiming for his cap? Was it hoping for a bigger catch?

After being frightened off, the bird circled KC a few times as he kept walking, his heart no doubt pounding. KC had more chances to make some more close shots, but I suppose the excitement of losing his cap and all caused him to get only blurred and over-exposed images. His D50 Camera did not react fast enough “Or maybe I should have lifted my finger off the trigger to let camera readjust itself.

Daisy, a Malaysian birder, wrote: “Obviously, this juvenile can’t tell the difference between a mouse and a human being wearing a baseball cap. I’ve been told raptors have been known to swoop at humans and cause scarring injuries. You are lucky! (Next time walk wearing a helmet). And what a flying shot you got there.”

Read about other attacks by House Crows: 1 and 2.