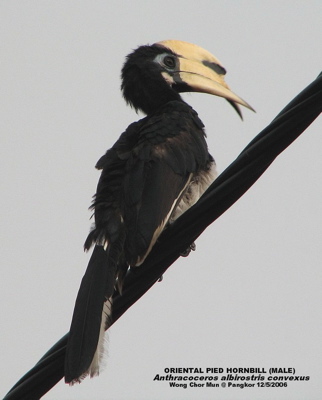 While holidaying in Pangkor Island, Malaysia in May 2005, Susan Wong caught sight of an Oriental Pied Hornbill (Anthracoceros albirostris) with a deformed bill. With such an unusual bill, the bird obviously would have problems feeding. Yet, considering its size, it would appear that it had not fared badly. Still, Susan wondered how the bird picked up its food.

I am not sure whether there are any earlier reports of birds with deformed bills coming from Malaysia and Singapore. However, there are dozens of observations by birders in the United States on beak deformities in chickadees (Parus spp.). Most of these come from feeder-watchers, people who set up bird feeders in their gardens to attract birds.

In most deformities the upper and lower mandibles are longer than usual, with the upper longer and decurved.

Scientists are still not sure what causes these deformities. One theory is that food may be a factor. The hardness of the food a bird eats can regulate bill growth. This is because bills, like fingernails, are soft structures that grow at a constant rate. Thus the harder the food, the more wear and tear the bill undergoes. And regular bill use keeps bill growth in check. Other than diet, injury, diseases, and parasites can affect bill growth.

It would be interesting if other birders visiting Pangkor Island can make observations on the feeding habits of this particular hornbill.

R. Subaraj, our bird specialist, reports that several years ago, he observed a Terek Sandpiper (Xenus cinereus), a shorebird with upturned bill, with a deformed, downcurved bill, in Punggol (Sungei Serangoon). This same bird turned up at the same spot for two winters, indicating that the bird had learnt to cope with its handicap and feed sufficiently well to not only survive for at least a year, but also managed to undertake at least two autumn migrations (south) and one spring migration (north).

Thank you Susan, for this rare image and note.

You can get more information on bill deformities at this web site.