By the end of April the top portion of the rotting trunk at Eng Neo collapsed due to the continuous rainy weather (left). This meant that the cavities used by the various birds were there no more. The top portion of the trunk where the Dollarbirds (Eurystomus orientalis) nested, was buried in the ground when it collapsed, probably trapping the nestlings. The Collared Kingfishers’ (Todiramphus chloris) nest, found lower down the trunk, was at the point of the break and not buried. A nestling was found at the base of the trunk, dead, while another was alive. Sreedharan Gopalsamy was there at this final chapter and gives his account:

“The Eng Neo area has been a favourite for birdwatchers and photographers in the month of April and early May due to the Hornbill sightings and the nesting of several species including the dollarbird and the collared kingfisher.

“On 30th April, I was over there photographing the Dollarbirds and their antics. When I moved over to the nesting tree I realised something was amiss. A huge chunk of the tree trunk had disappeared. Together with it, the nests of Dollarbird and Collared Kingfisher. The kingfisher parents appeared every 10 minutes searching for their nest to no avail. They kept going to the wrong “hole”. They could not comprehend why the juveniles could not be found. 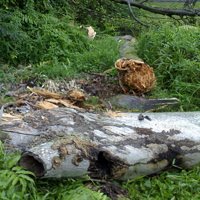 “Later, a friend, Philip, and I decided to investigate further. Looking around, Philip spotted something bluish hopping amongst the tall grass. It turned out to be a very tired and disoriented juvenile Collared Kingfisher. I made a quick call to Ashley who, as it turned out, was at Ayer Keroh at that time. He suggested us taking it to Sungei Buloh Wetland Reserve or Jurong Bird Park and handing it over to them for subsequent nursing.

“A further look around and some calls later allowed us to figure out what had happened. All was fine on the 29th till late afternoon. The heavy rainstorm that night caused the large part of the trunk, just below the kingfisher’s nest, to break-off and plunge towards the ground. The falling part broke into several pieces upon impact. The top end was impaled into the ground. This was the Dollarbirds’ nest. Despite all our efforts, we could not budge the buried trunk and so any Dollarbird chicks would have been buried alive. After a look around, I located the broken stump with the kingfisher nest. As the nest was not covered, it allowed the poor shell-shocked juvenile to escape. Looking around the nest I found a dead sibling (of the juvenile) who had probably died some days previously but not from the impact. 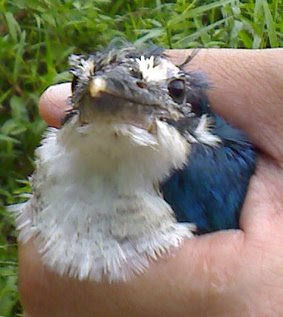 “Philip decided to take the juvenile home and nurse it. He fed it with worms in the first couple of days and included little frogs in its diet subsequently. By 2nd May the juvenile could fly a few meters. On 3rd May, the juvenile was strong enough to fly off and start its new life on its own.”

Thanks Sree for the most interesting account of the final chapter of the Eng Neo saga. All images by Sree except top by YC Wee. 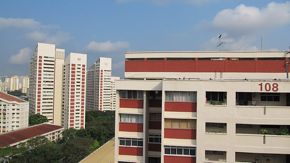