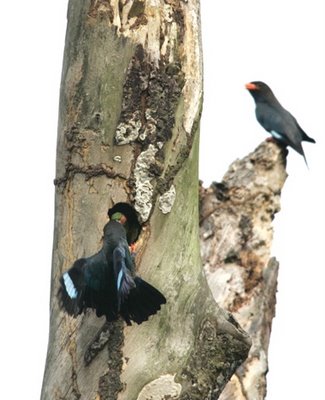 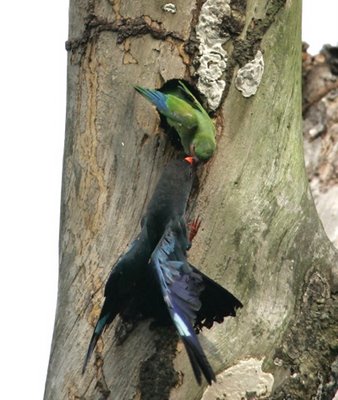 Dollarbirds can be very aggressive indeed, especially when their nests are being raided by other birds. This exciting drama was captured on ‘film’ by Chan Yoke Meng at the patch of secondary growth at Eng Neo recently.

Th parakeet’s sudden entry into the nest caused panic among the pair of Dollarbirds that was around the dead tree. The latter were circling around and screeching when suddenly one flew straight into the nest. The parakeet was already inside the cavity but the Dollarbird pushed itself in, got hold of the former’s beak and literally dragged the parakeet out of the nest. The Dollarbird succeeded in expelling the intruder from the nest. Peace returned to the area.

For the next hour or so one of the Dollarbirds remained in the nest, its body blocking the entrance and one of its legs firmly placed on the rim. It was in defensive mode, ready to fly out and confront the parakeet should it attempt to make a further attack. The other Dollarbird stationed itself at the top of the trunk 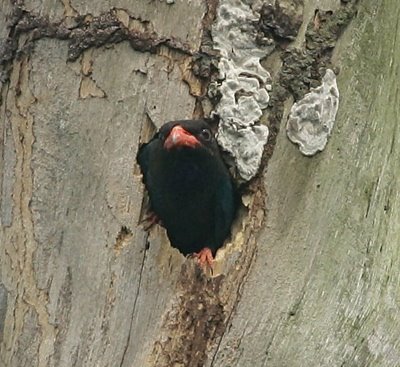 Whether the parakeet did any damage to the occupants, either the eggs if the birds were still incubating or the nestlings if any had hatched, could not be ascertained. But the Dollarbirds were still seen flying regularly into the nest a week after, usually one entering the nest for some minutes while the other stood guard at the top of the rotting trunk.