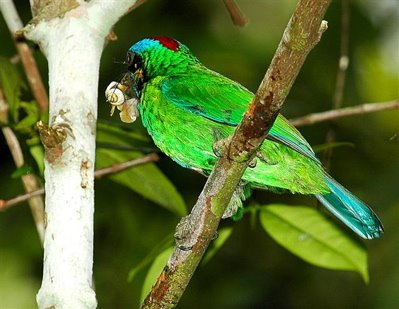 Barbets are stout birds with a prominent bill and bright, colourful plumage. Another characteristic feature is the prominent nasal and rictal bristles. They nest and probably also roost in tree cavities, thus they are found in wooded areas with old trees.

Now barbets are predominantly frugivorous. Their favourite fruit is fig but they also eat other fruits as well. Small fruits are swallowed whole and if they have large seeds, these are regurgitated. Larger fruits are pecked down to manageable pieces and chewed before swallowing. The brush-like tongue helps in breaking down or manipulating pieces of fruits. Some species also eat nectar from the flowers of Erythrina, Bombax and Butea. %pD

But barbets are not exclusively frugivorous. They can be opportunistic feeders, seeking out insects, especially when there is a termite hatch. They also eat insects and other arthropods when available. During the nestling stage the young birds are fed with animal food immediately after they hatch out of the eggs.

There are records of Lineated Barbet (Megalaima lineata) eating bird’s egg and nestling, as well as catching lizards and frogs.

A Red-throated Barbet (Megalaima mystacophanos) was reported by Medway & Wells in 1976 feeding on a 3nail in Ulu Gombak, Selangor, Malaysia. A male bird was seen passing a snail, after much beating against a branch, to a female, in an apparent courtship feeding.

Although the observation by Johnny is not new, it is probably a new record for Singapore. According to Leong Tzi Ming the snail looks like an Amphidromus sp.

Thanks to Johnny Wee for the observation and image, Wang Luan Keng for the lead to the reference and Leong Tzi Ming for the tentative ID.