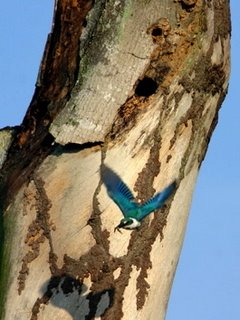 A pair of Collared Kingfishers (Todiramphus chloris) was nesting in a cavity found at the central point of a rotting tree trunk in a small piece of secondary growth at Eng Neo. Most of March 2006 the birds were flying in and out of the nest. Sometimes the arrival would be accomp!nied by the shrill cries of the bird. At other times the bird would fly in silently.

The hungry nestlings needed to be fed regularly and the parents worked hard bringing them food. There would always be some invertebrates like a centipede or a grasshopper. The birds would stop over at a nearby tree, checking to see whether it was safe to proceed, before flying to the nest. Initially, it entered the cavity to pass on the food but later it just stopped at the entrance. Sometimes both parent birds approached the cavity at the same time. In such cases one would veer off and wait its turn. There had also been a few cases when the morsel brought to the nest was not accepted by the nestlings (see above). In such cases the parent bird flew off to a nearby perch to consume it. 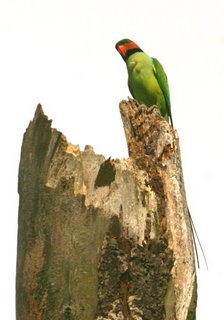 At the upper end of the trunk was another cavity. Here, a pair of Long-tailed Parakeets (Psittacula longicauda) initially took occupancy. The presence of the parakeets nesting above caused no problems to the kingfishers. Both species coexisted peacefully. However, when the hornbills were around the rotting trunk, which was not often, the kingfishers as well as the parakeets were invariably frightened away. 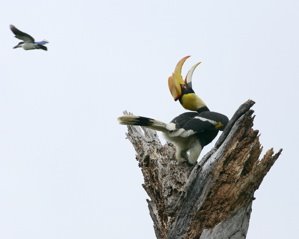 Text by YC; images by Meng and Melinda Chan (Great Hornbill, bottom) and YC (the rest). 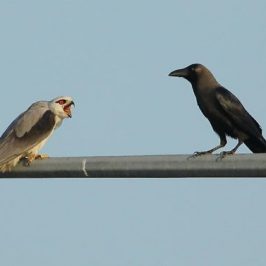