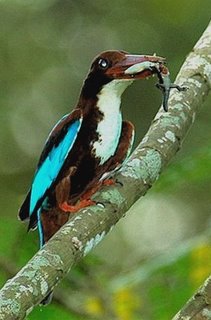 On 2nd April 2006, Johnny Wee was at Venus Drive when he spotted a White-throated Kingfisher (Halcyon smyrnensis) perching on a branch of a nearby tree. Apparently it was intensely eying a lizard on the ground nearby.

Johnny continued: “Its head feathers were fluffed erect and the pupils of its eyes were dilated to the maximum such that the eyes appeared white. Then suddenly the bird launched towards its prey. I was not able to see exactly what happened as my vision was blocked by the grass around. The bird then picked the dead lizard and returned to a nearby perch.

“The lizard was most possibly dead when the bird brought it back to the nearby perch. After all, its body was clearly pierced through by the bird’s beak as a result of the initial attack. The bird then flew off with the lizard between its beak.”

This kingfisher is a typical sit-and-wait predator spending long periods perched on a branch high above ground. While surveying the surrounding for prey, its head may be bobbing or its tail wagging. Once a potential prey is spotted, the bird swoops down to the ground, landing feet first, seizes the animal and return to the same perch or a nearby perch.

Text and image by Johnny Wee. 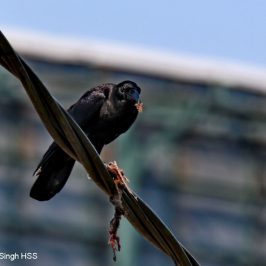