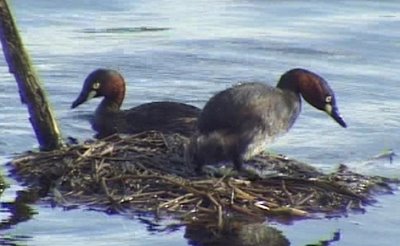 “On December 12th, 2005, as I was leading my American clients on a birding tour at Serangoon (Sewage Works), we stopped to observe an adult Little Grebe (Tachybaptus ruficollis). Suddenly, another adult swam into view with two juveniles in tow, much to my excitement. There has been only three adult grebes left here and so it was quite unexpected to find that they had bred.

“The Little Grebe first arrived in 1992, at a little pond adjacent to the old Ponggol pig farms. By 1994, there were a few feeding and breeding across the Serangoon River, at a large pond, at the Serangoon Sewage Works. Colonisation from nearby Malaysia was a success and the grebe population continued to grow with a high count of 27 birds in 1996.

“Soon after, the large pond was filled in and although a shallow pool emerged from the original site, the only good pond that remained was the smaller pond. This pond continues to exist and holds the last remnants of the Little Grebe population. This had dwindled to just three birds in the last two years.

“The grebe makes a floating nest of water plants in the middle of the pond and it has bred a few times before, especially when the larger pond was around. The small remaining population still built nests but in many cases, these were not utilised. That is until this year. A nest was built in the middle of the pond and an adult sat on it. Even this behaviour did not mean nesting.

“The only record of a Little Grebe away from the Serangoon/Ponggol area was of one bird at the Tuas grassland. Why is the species not found at Sungei Buloh and other wetlands areas? One likely reason is the presence of the large predatory Common Snakehead or Aruan.

“So, is the Little Grebe to have a very short stint as a Permanent Resident?

PS 1: On 27th March 2006 Ong Kiem Sian wrote in: “I saw once a family of grebes with 2 chicks at Tampines pond. I have not been there for many years. Maybe the pond does not exist anymore.”

PS 2: Alvin Wong from Beijing wrote on 11th April 2006: “Howdy folks, I’m currently in Beijing, China (where blogspot is blocked and I cannot post my comment on besgroup). I used to observe Little Grebes swimming in the water-logged empty land across my block in Punggol. now it’s a cluster of HDB flats under construction. Bird-watching from my living room…”