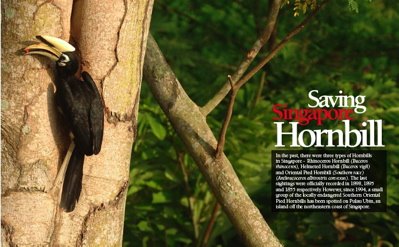 The Hornbill Project Singapore is the brainchild of French naturalist, Marc Cremades of the Winged Migration fame. The ides came two years ago when he visited Pulau Ubin with long-time local birder, Prof Ng Soon Chye.

Much is known about these large and wonderful birds but relatively little is known about the breeding behaviour. We know that the female is confined inside a tree cavity during egg incubation and the development of the nestlings. During this 6-7 weeks, the male bird regularly and faithfully brings food to feed his mate and later the nestlings as well. Only when the nestlings are ready to fledge will the seal be broken. However, next to nothing is known what happens inside the sealed nest.

The project is using infrared video cameras to monitor activities inside and outside the nests. Male birds will be tagged with a miniaturised GPS to track their movements. A temperature gauge placed inside the nest will study the temperature fluctuations. A gas sampling system has also been installed in the nest cavity.

Local partners of the project include National Parks Board, Jurong Bird Park, National University of Singapore, National Technological University and the BESGroup of the Nature Society (Singapore). International partners include ornithologists and scientists from France and Thailand.

As the Bird Ecology Study Group is directly involved in this hornbill project, we are monitoring sightings of these birds on mainland Singapore. Information on dates; number of birds; whether male, female or juvenile; locations and time of sightings can be sent to me at wee37@starhub.net.sg. This information would come in useful when we plot the flight range of these hornbills.

We are grateful to the many who have sent in sightings on the Oriental Pied Hornbills (Anthracoceros albirostris convexus)as well as the Great (Buceros bicornis) and Rhinoceros (B. rhinoceros) Hornbills.

Read the more detailed account of the project in the latest issue of Asian Geographic (No. 35 Issue 2/2006).

(Image comes from the title page of the hornbill article in Asian Geographic.) 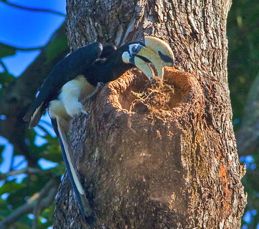