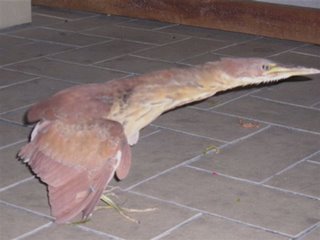 Seiko Okajima reported an early morning intruder to her house at Opera Estate in February 2006 thus: “My cat brought in this bird to my house early this morning around 1:00am of Feb 3, 2006. This young bird was not harmed and later flew away safely, but lost some feathers taken by my cat. My house is in Opera Estate off Siglap Road. I’ve never seen this kind of bird near my house during the day.”

Our bird specialist, R. Subaraj, has this to say: “The bird in the photos is a Cinnamon Bittern (Ixobrychus cinnamomeus). The species is normally found in wetland areas such as flooded fields and marshland. While a small number are resident in Singapore, it is believed that many occur as migrants from northern Asia. During the passage months, when the birds are undergoing migration, different species of migrants turn up at the strangest places, including buildings and homes, probably due to disorientation caused by the bright lights of urban areas. 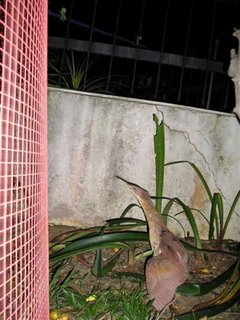 “As Opera Estate is a suburban area, quite away from the nearest marshy area, this individual is probably a migrant that was undertaking a nocturnal movement (most migrants travel by night). For future reference, it would be a good idea to house such migrants for the night and release them during daylight at the nearest marshland/wetland area. This will minimise the risk of the bird getting further disorientated by the lights at your estate and allow the bird to feed in suitable habitat to recover from both the distant movement and the cat attack before continuing it’s travels the next night or so.”

Input by Seiko Okajima and R. Subaraj, images by Seiko.

After the above account was posted, Hung Bun Tang sent in the image of a dead Cinnamon Bittern (below) he found near Malcolm Park in the early morning of 9th January this year. He also believes that this species may be more prone to disorientation during nocturnal flights, thus becoming easy victims to attacks by predators. Thanks, Tang. 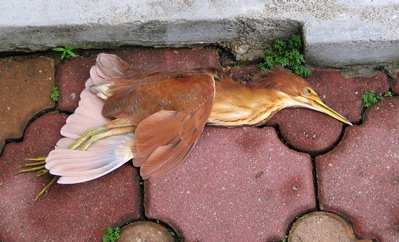 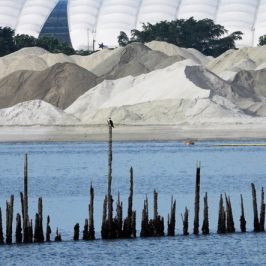