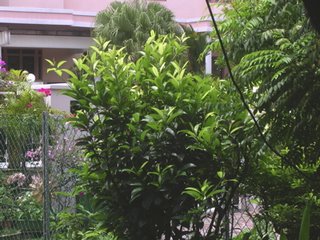 On 10th February 2006, five days before the writing of this entry, my parents noticed movements in our small chiku tree (Manilkara zapota). This tree is no more than 2 metres tall and is right next to the fence that separates my neighbour’s garden from mine.

In my mother’s words: ” An olive bird with a dark ring around its eyes with twigs in its beak was hopping from branch to branch.” There were two birds, identified as a pair of Yellow-vented Bulbul (Pycnonotus goiavier). Within an hour or so, a small cup of twigs came into shape. The bird would often sit in its nest, while arranging and weaving new-found twigs into the cup around it. They were done by the end of the day after repeated returns to the nest with more nesting materials. 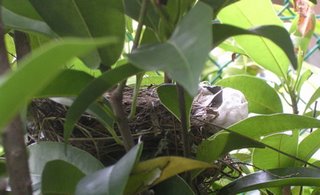 The nest was built with a variety of twigs, some coarser, some finer. But what struck me was the unusual white substance that formed part of the cup (see left). Apparently, it was a small piece of fabric that was incorporated into the nest.

The nest was well camouflaged but had only one weakness. It could be viewed easily from the side due to an opening in the chiku tree foliage. As such, the bulbuls, whenever they were at the nest, would often fly off the moment they saw anyone approach from that side.

I also noticed that they entered the nest from various points to avoid detection. One entry was by way of the fence. By landing on the fence that was beside the tree, the birds had easy access to the nest – just two hops away. Another was from the bottom of the foliage, and by hopping from branch to branch, it could reach the nest at the top. Thus the birds would not be flying in from the top and be noticed. This is quite similar to the strategy adopted by the Greater Coucal (Centropus sinensis) that walks till it reaches the nesting site, then fly up, rather than fly in straight.

A day after the nest was completed the birds were rarely there. Whenever they returned, they would bring more materials, to continue touching up the nest. After they were truly satisfied with the nest, they still did not frequent it and were often seen on my neighbour’s roof making alarm calls. This could be because they noticed me watching them.

However, they returned nearer to the nest in the mornings and evenings. Perching on the fence and making excited calls, raising and lowering their heads as they did so.

I have no idea whether these bulbuls would lay eggs as there have been a lot of interference from my immediate neighbour and from my parents who tended the garden, usually resulting in the bulbuls leaving for long periods at a time.

Contributed by Lim Junying with images supplied by him, 15th February 2006.

PS: After 12 days of incubation, the parents failed to return the next day. I assume it was either a bad egg or the egg was taken by a lizard or cat. JY Lim, 25th March 2006. 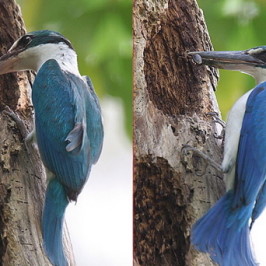