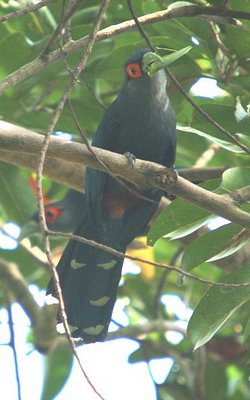 On February 7th 2006, as we were conducting a recce trip at Sarimbun, Robert Teo, Robin and I came across a party of three Chestnut-bellied Malkohas (Phaenicophaeus sumatranus) in the secondary forest. The encounter was surprising enough as there are no prior records from this part of Singapore.

The Chestnut-bellied Malkoha is the last surviving species of malkoha in Singapore. The resident population is confined to the central nature reserves of Bukit Timah and the Central Catchment with the odd records from the fringe areas of Bukit Batok Nature Park, Bukit Tinggi and Upper Thomson Road. A record from Pulau Ubin by Robert Teo probably refers to a visitor from nearby Johor. In Malaysia, this species of malkoha resides in lowland rainforest, riverine forest, coastal forest and mangrove forest.

As there were three birds present at Sarimbun, it remains uncertain whether these birds are resident or merely visitors from the nearby coastal mangrove belt in Johor. The birds were fairly confiding, allowing close observation for 15 minutes or so, as they foraged in the middle and upper storeys of the trees around.

Suddenly, one bird flew down to the ground and was observed foraging on the ground, amongst the leaf litter. It made short hops as it searched for whatever was about without success. Soon, it hopped up to some low branches before flying up into the crown of the nearest tree. The malkoha is largely an insectivore and hunts for invertebrates among the branches of forest trees and bushes.

I do not recall seeing a malkoha (certainly not this species) foraging on the ground before, despite numerous encounters over the years, both here and in Malaysia. Has anyone witness this behaviour from a malkoha before?

This bird feeds mainly on locusts, mantids, stick insects, leaf insects, cicadas, crickets, grasshoppers, large hairy caterpillars and sometimes even frogs and lizards. It also eats fruits and seeds. The bird in the picture, courtesy of KC Tsang, has in its beak a katydid, a green long-horned grasshopper. YC