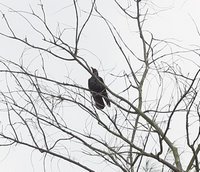 After only three days trying to incubate their eggs, the House Crows (Corvus splendens) gave up on the morning of 28th December 2005

Thereafter, it was open house for the Asian Koels (Eudynamys scolopacea)! They were increasingly daring, stealing into the nest throughout the day, but the height of activity was always in the mornings and late afternoons, and one female even stayed in the nest for more than 10 minutes. There were two occasions when the male koel took an interest, hopped into nest, looked around before hopping off again.

Although the crows seem to have abandoned their nest, they are not averse to visiting it every day, and sometimes twice or three times a day – to check on the contents? Once I saw presumably the female pecking, pushing and pulling some of the twigs. It seemed to be tidying the nest or doing some house-keeping! However, on another day one crow actually took away some fine twigs from the nest!

I would know they were visiting because often they would caw but other times I just happened to look up and there they were! The crows would still chase away the female koels if they chance to see them approaching the nest, but I think they are losing interest. They behave as though they have another nest somewhere else. Lately, they sometimes fly overhead by-passing our tree. Female koels still visit the nest, though not as frequently.

And throughout the days I was home, a lone male koel would spend long periods sitting on the lower branch mournfully calling ‘koe-ell koe-ell’ its pitch gradually rising in desperation.

The nest looks a little thread-bare/twig-bare this morning.

If each time a female koel visits and lays an egg, we’d have more then two dozens eggs in nest. But do they necessarily lay eggs at each visit?

This is the end of koel-crow watching, I hope. Maybe I will still watch to see when the nest will drop its load of eggs!

Postscript:
Just after writing the above and when I was sweeping the floor, four crows flew up to branches near the nest. One had some food (?) in its beak, flew into the nest, moved around and came out before another crow went in. This crow cawed and fussed around, unsure whether to sit in or leave. While the other three crows left, this crow hopped to an adjacent branch, sharpened its beak, looked around, spied a female koel hiding in the far end of tree and chased it all the way to Lewis Road.

Who are these four crows? Obviously two couples. Is one pair the owners of the nest?