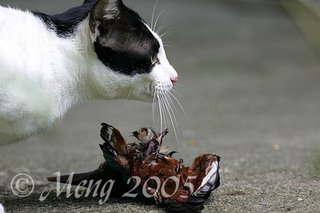 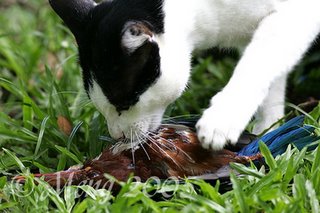 Cats are notorious for their ability to catch and dismantle birds. Many of us would have seen dead birds with their feathers torn and their bodies ripped apart. But how many of us have actually witnessed a cat kill?

On December 4th 2005 Meng & Melinda Chan actually witnessed a kingfisher being eaten by a cat. Through a pair of binoculars they spotted a kingfisher flying downwards towards the ground. Suddenly a cat jumped up and pounced on the bird. At first they thought that the bird escaped as they saw it flying away. But when they reached the scene, there was a dead kingfisher on the grass. And perching nearby was another kingfisher making alarming calls. Only then did they realize that a pair of birds was involved and one of them fell victim to the cat.

The Chans alerted Ashley Ng as they thought that birders on his Pigeon-holes e-loop might be upset by the incident and the gruesome images they managed to capture on their camera. But birders are tougher than that and so I persuaded Melinda to share the experience and images, and this is how this posting comes about.

Other reports of cat-kill:
Keith Hiller’s cat regularly caught mynas, doves and once even a sunbird. Apparently they just do it for fun, not for food. On the other hand Jeffrey Low’s cat caught an unknown species of bird, ate and regurgitated it. Lim Jun Ying’s pet Spotted Dove (Streptopelia chinensis) was mauled by a cat while still in the cage. On the other hand Jeremy Lee’s experience is a little mysterious. He relates how, when he was a kid he regularly collected headless Javan Munias (Lonchura leucogastroides) decapitated during the night while still in their cage. Was it a cat? An owl perhaps?

Further comment by R. Subaraj: When I lived in Siglap and had cats as pets, they would bring in a variety of birds. The usual targets would be the Eurasian Tree Sparrows (Passer montanus) (which I observed one of my cats eating twice) and Olive-backed Sunbirds (Nectarinia jugularis). They would also kill the Changeable Lizards and geckoes, also eating the latter. The most surprising bird one of my cats brought in one day was a dead female Pink-necked Green Pigeon (Treron vernans). As this is normally a bird that stays high up in the trees, I can only guess that this individual was ill and vulnerable for it to be caught by a cat.

Early one morning I found a fresh sprig of tembusu (Fagraea fragrans) with ripe berries... 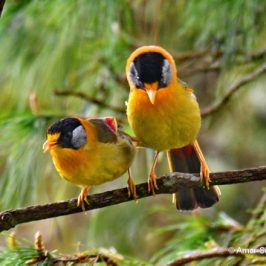