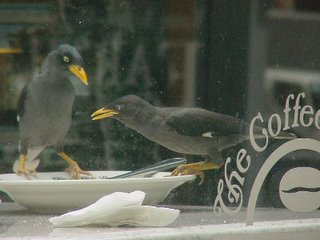 The black birds wasted no time swooping down from nowhere and claiming ownership of their spoil. First there were four; then there were three. Soon the jostling settled down to two; each lording their own half of the saucer with an air of superiority. ‘The world is MY saucer!’ uttered the pair instinctively at the same time.

As one would imagine, the posessive ‘MY’ just did not sound right. After all, there were not one but two birds. It did, however, clearly betrayed the other’s heart — like black against white.

Like it or not, they knew they needed each other to keep other birds away. It was obviously not an alliance made in heaven.

The birds were nonetheless embarassed at their own tactless display and tried to make less of it.

“Hey, we are * Mynas, aren’t we?! ‘My’ here, ‘my’ there… we My-nas just can’t get it out of our system, ha ha!”, chuckled one uneasily. “Ya, right!… ha ha!” half-grinning the other in agreement. In any case, it was time to eat. They turned immediately to the leftover food inside the saucer.

But lo, to their greatest dismay, something had beaten them to it — or so they thought. It was moving steadily round and round inside their precious saucer.

The two black birds began pecking at it instinctively; slowly at first, as they did not know what the tiny thing was. But as frustration set in, the pecking grew more frantic and vicious. A frenzy ensued. The saucer rocked erratically, and as it did so, inched closer and closer towards the edge of the table…

Epilogue
None of the other patrons at the open-air cafe were aware of the black birds’ antics that strange morning. I did because I was watching closely from the next table. By the time I got up to leave, the two silly birds were still fighting off the intruder. So if you should ask me about the fate of the saucer, I wouldn’t have known. Perhaps this is best left to suspense. Good short stories ought to leave room for readers to guess, I think. : )

I remembered taking one last look into the brilliant sky as I got up from my chair. The White-bellied Sea-eagle was still circling overhead — round and round up its thermal ascent. She was truly majestic. Somehow I wished I could tell her what the two black birds had been up to. But I doubt she would be interested.

Why should anyone be bothered about free birds who chose to go after crumbs and live life no better than battery chickens? For them, the spirited flight is lost.

The above first appeared in Joseph’s Webpage Eart-h and is posted here with his kind permission. 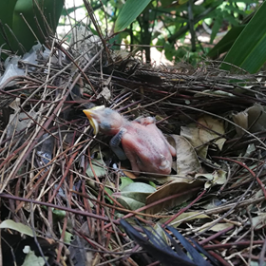 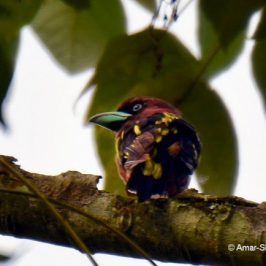 “Been watching a number of Banded Broadbills (Eurylaimus javanicus pallidus) in different segments of this...