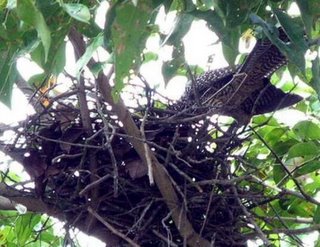 I have given an earlier account of the series of attacks on the House Crows’ nest (Corvus splendens) by Asian Koels (Eudynamys scolopacea). Well, on Wednesday 28th Dec 2005, the tenth day after they began building their nest, the crows were again seen. That morning at 8.20 am two crows stood on the branch beside their nest, cawed several times and flew off. Soon after a koel called and two females hopped cautiously from the lower branches right up to the nest. They took turns to climb in and stayed a few seconds each time before flying off.

One crow returned at 9.30 am, stood at the edge of the nest, made a 3-sec inspection and flew away. Soon after, a single female koel sneaked up to the nest, climbed in and out, and in again.

I saw a crow again at 2.10 pm when it hopped out of its nest, cawed and flew away. As the nest was unattended, two females and a male koel flew from a nearby bauhinia tree (Bauhinia sp.). A female climbed into the nest, came out and the male climbed in as if to inspect the eggs. The other female tried to get into the nest but the male charged at her while making that loud koel call. This loud call brought back a crow that chased them all away. But the crow also stayed away.

At 4.15 pm the male koel was inside the nest again for about 5 seconds before flying off. A while later a female flew up and hopped in and out of the nest several times.

At 6 pm, three koels were seen on the tree. A female’s ‘kuacking’ brought a black bird flying in towards the tree but it was intercepted by another black bird, both flew away from the tree. Meanwhile the female koels took turns to hop in and out of the nest. The first female made one of the loudest ‘kuack-kuack’ sound when she hopped out of the nest (like a hen cackling after it has laid its egg). When the two black birds returned, the females flew off. One of the black birds landed on a branch near the nest, peered in and flew off again into the dark.

At 6.15 pm a broken egg shell, still moist with albumin was on the ground below the angsana tree (Pterocarpus indicus). Shell was blue-greenish with dark speckles.

The next day (eleventh day) saw batches of koels boldly, and taking their own time, hopping in and out of the unattended nest. The male koel made two visits to inspect the nest.

Are there more than a dozen koel eggs in there? If the blue-green eggs were crow eggs, then the crow had laid only 2 eggs!

The crows have since abandoned their nest! After the dramatic night raid of 27th December, no crow was seen incubating.

Everything quiet this morning, with no activities. Is this the end of the koel-crow saga? Are crows smarter than what we think? Will they not play surrogate parents anymore?