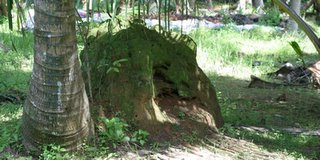 “A termite hatch happens when a new generation, with wings, departs their old colony and disperse in search of a new area to begin a fresh colony. This happens when conditions are right and in the tropics it happens anytime of the year but particularly after rain. These hatches can sometimes be quite large as several colonies disperse at the same time. Usually this happens near dusk.

“We often know about a hatch when large numbers of flying termites are found around bright lights and sometimes many end up in our swimming pool or bathtub. For the bird world, such hatches provide a buffet for the hawking insectivores. Over the years, I have had the opportunity to observe many a hatch on my evening walks in nature areas, golf courses and various other places. Around the forested areas of our island nation, these can be quite exciting as many woodland residents and migrants join in the feast and provide an aerial show that is a treat to watch.

“Such an occasion recently occurred while I was conducting an evening bird survey at the treetop walkway at Sime Forest. From 6.00 pm onwards on December 7th, I started noticing quite a few bugs flying around. This intensified in number for the next half an hour or so. By 6.45 pm there was a huge cloud of flying termites above the walkway – the biggest hatch that I have ever encountered was fully underway.

“A number of birds were wheeling around and feeding off this large flying buffet. Three Dollarbirds (Eurystomus orientalis), a few Greater Racket-tailed Drongos (Dicrurus paradiseus), a pair of Asian Fairy Bluebirds (Irena puella) and a couple of Pacific Swallows (Hirundo tahitica) were among the residents involved. Several Himalayan Swiftlets (Collocalia brevirostris), of both locally occurring races, and an Asian Drongo Cuckoo (Surniculus lugubris) were among the more expected migrants feasting as well. Surprisingly, very few Blue-tailed Bee-eaters (Merops philippinus) hawked as they flew over heading back to roost. This bird is usually one of the dominant species found at such occasions.

“An Ashy Drongo (Dicurus leucophaeus) of the mouhati race (a race not previously recorded in Singapore) was also observed hawking. Also taking advantage of the easy meal were two migratory Grey Nightjars (Caprimulgus indicus) fluttering around catching termites at least a half hour before their usual dusk activity period. Interestingly, the resident Large-tailed Nightjar (Caprimulgus macrurus) did not come out to feed until the normal dusk period.

“Of great interest to me were the opportunist feeders – birds that did not normally hawk insects but could not resist such a bonanza of slow flying insects. These clumsily flew around trying their best at catching the termites on the wing. They included two Hill Mynas (Gracula religiosa), two Large-billed Crows (Corvus macrorhynchos) and a Brahminy Kite (Haliastur Indus). They were comical to watch. The mynas did short flights through the swarm, catching what they could. The crows flew around slowly as they tried to maneuver for a meal. As for the poor Brahminy Kite, it actually tried to hover in the middle of the cloud of termites!

“In all, 13 species of birds were observed taking part in the feast but everything was happening all at once that there could have been others involved. Apart from the birds, I also saw a Decorative Tiger (Ictinogomphus decoratus) dragonfly, another type of Gomphid (dragonfly) and at dusk, a Pouched Tomb Bat (Taphozous saccolaimus) also hawking the termites. So the next time that you go out for a late evening walk amidst nature, keep your eyes to the skies and you may just enjoy a unique aerial display too.”

NOTE: A termite hatch is actually a nuptial flight of winged reproductive males and females that swarm out of the colony before landing on the ground below. A male and a female pair on the ground after losing their wings and then go looking for a site for the future colony. There they mate and the queen begins laying her eggs. Initially feeding the young with predigested food, both reproductive individuals will be in turn fed by the workers that develop from these eggs. The reproductive individuals have functioning eyes unlike the workers and soldiers that are blind. 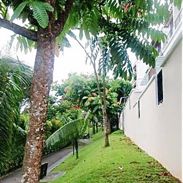