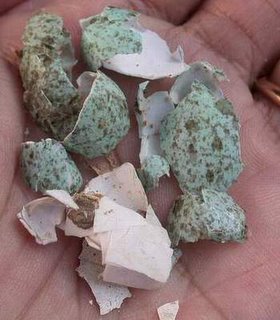 After last night’s series of attacks by the Asian Koels (Eudynamys scolopacea) (see 2; also 1), I went downstairs this morning to survey the grounds below the tree well before the sweepers arrived. There were egg shells lying around, bluish shells with dark speckles, probably those of the crow’s.

The light cream shell with faint brown specks, seen on the lower portion of the image, was picked up yesterday around noon. I wonder whose egg was this? Could it belonged to the koel that made the dramatic attacks, missing the nest when she dropped an egg?

This morning there was always one House Crows (Corvus splendens) staying put in the nest all the time. It sat with its beak apart, shifting her position several times. It must be tedious sitting there under the hot sun! As far as I can ascertain, it only took a short break of about four seconds, leaving the nest and remaining just outside the nest, stretching itself.

At 1.00 pm its mate flew in to check on the situation, flying off almost immediately after. But a minute later it returned with some food (cannot see what it was) that it inserted into the nesting bird’s mouth. Wow! I presume that was the male bringing food to the incubating female.

Quick as a wink the arriving bird took off again, to return twice. I am not able to say whether there were any exchange of food as my view was blocked by the large nest.

I was out till late tonight, and it was raining. Was there another assault?

Now at 10.10 pm, sitting at my computer, suddenly a crow cawed twice. I looked out just in time to see the foliage ruffled and a koel crying ‘kweek kweek’ as it fluttered downwards out of sight. Two minutes later a koel in the tree called ‘kweek kweek…’. Was the Koel still in the tree? Did it drop in another egg? At 10.20 pm crow cawed again, but I did not notice any disturbance around.

The koels here seem to strike at night. 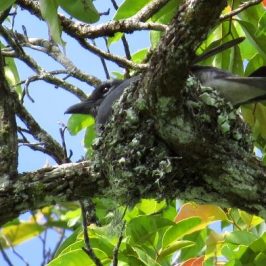