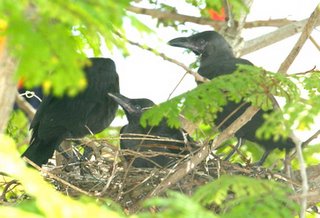 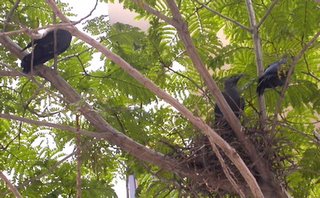 According to Laurence Kilham’s “On watching Birds” he says “almost nothing was known of life of American Crow in spite of its being among the commonest of birds.” More so in Singapore, the House Crow (Corvus splendens) is considered to be a pest and a threat to all native birds. It is regarded as public enemy number one and bounty hunters are paid according to the number of birds they shoot.

I usually would walk past a yellow flame tree (Peltophorum pterocarpum) at the corner of a car park as I entered the back of my clinic. It was on March 9, 2005 that I first noticed the presence of a nest in the canopy of the tree. How long it took to build the nest I am not sure, but it must have been quite fast, as I did not notice it before. The nest was seated on the forks of a tree branch and shaped like a bowl surrounded by twigs arranged in a circular fashion about 10 meters from the ground. My observations were made from the ground and from the landings of an adjacent Housing and Development Block. As I was not able to look into the hollow of the nest, I could not tell when the eggs were laid or when they were hatched.

It was on March 31, 22 days after I noticed the nest that I saw signs of life in the nest. Every morning at about 8.30 am when I arrived at the clinic, I would notice the pair of parents at the nest. Sometimes one of the birds would be seated in the nest. I had no idea how many eggs were laid until later when the chicks popped their heads out of the nest for me to count them.

At night I was unable to observe which parent bird sat on the nest. What I saw was a bird perched above and near to the nest. When I shone my torch the bird would fly away.

The field guides do not differentiate male and female crows but I was able to tell the sexes apart in that the female had a distinct whitish marking around the neck and was slimmer, whereas the male had a greyish neck and visibly strong neck muscles and stouter. It was the female that spent more time around the nest.

There were in all 3 chicks. The first fledged on 11 April, the second on 14 and the third on 18. On April 26 the chicks were able to fly away from the nest and disappeared for a while.

The chicks had won their ‘wings’ by flying to adjacent trees in the car park. One interesting observation was that when the chicks were about to fledge, a flock of crows came from nowhere and cawed loudly, shouting encouragement to the chicks in the nest. This occurred as each chick took its turn to fledge. That was my first encounter with cooperative rearing of the young. I did not see any crows other than the parents feeding the young in the nest. Lawrence Kilham says in his observations of the American Crow, ”The helpers, sometimes up to six or seven of them aided in all phases of nesting, from nest building to feeding the incubating female, and, after hatching, feeding the young before and after they fledged.”

On and off for some weeks after, the fledglings would come back to their familiar surroundings on the yellow flame tree. On one occasion I witnessed the same female parent bird with its prominent whitish neck instructing a chick with a morsel of food on the floor, a personal coaching lesson, no doubt.

Three months later, on July 13, a nest appeared suddenly in the same yellow flame tree. On July 21 a pair of crows was seen going in and out of the nest each morning. I presume these were the young crows that had matured and were nesting. Then I looked at the opposite bigger tree near the rubbish depot and found another nest in the canopy. A few days later as I walked to the front of the clinic I spotted another nest in the canopy of another tree. This was the third nest and the pair of crows would fly along this flyway, visiting all the three nests. However, on September 7 the nest near the rubbish dump disappeared without a trace. On September 8 the nest in front of the clinic vanished and the next day the nest in the yellow flame tree was nowhere to be seen. I came to the conclusion that these three nests were trial nests that the pair of young crows was building.

Comments by R. Subaraj: Dr Wu offers a couple of interesting views but more observations are required
before these behaviour patterns can be fully understood and taken as normal. This includes the suggested cooperative encouraging by the group of crows for the fledglings to leave their nest and the trial nests being built by what is
taken as young crows.