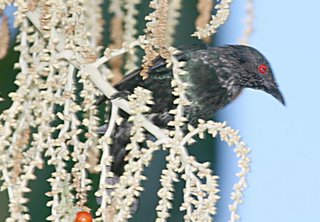 The following is an account that I wrote up in the late 1980s, and came across recently when sorting out old papers.

Working in my study in the late afternoon of June 1st 1988, a tap tapping noise brought me to the window, rather expecting to see a Greater Coucal (Centropus sinensis) dealing with a garden snail/giant snail (Achatina fulica) on the path next to the garden. However, the noise was coming from what looked like an Asian Glossy Starling (Aplonis panayensis) standing on a small, bricked terrace on a slope of the garden. I rushed for the binoculars and indeed there was now another AGS holding a snail shell in its beak and bashing it on the ground. After what was considered sufficient effort, it put the shell down, gripped part of the exposed snail with its beak and pulled and waved it in the air so that the shell and snail parted company and the snail disappeared into the AGS. Thereupon the two birds flew off and I sped out to gather the evidence. They had been eating the land snail Hemiplecta sp., which are flattish, about 2-2.5 cm in diameter, and 0.5 cm thick.

Once I was indoor again, the birds reassembled for the second performance, having added a third member to the cast. They were walking around on the brick terrace looking for snails under the plants and on the side of the bricks. They each found at least one snail, but one (the newcomer?) was not yet adept at bashing, and so one of the others took over and finished that snail off. Then, looking just like mynas, they walked a few feet up the short grass into the long grass by the fence, disappeared and came out one after the other with a snail, found on the concrete footing of the fence. One tapped his or her snail on the brick again. Another flew onto a bit of old pipe sticking out of the adjacent old water tank and tried tapping on that, but the snail fell off when put down.

Two evenings later, when at home in the early evening, I saw the trio (presumably the same three adult birds), plus an immature bird, repeating their dietary adventure. They foraged at the edge of the brick path, by plant pots under a jackfruit tree and in the brick terrace. In the adjacent part of the neighbour’s garden they foraged near old plant pots on a cleared patch of ground under an old flame tree. They tapped the snails on the brick path, on the wide branches of the flame tree, and on the neighbour’s tiled roof. Once the shell had been well bashed, the snail seemed to come out pretty easily. I never saw any of the birds appear to hold the shell with the foot whilst pulling the snail out (as compared with my memory of the Greater Coucal’s struggle with the much larger garden snails).

I saw and heard the starlings eating snails probably one or two more evenings, and then no more. At first I wondered why they had given up on what seemed such a good source of food. A while later, when certain plants were flourishing, I realized that were hardly any land snails around, and that the birds may well have exhausted the supply in my garden. Whether the gang of four took their skills off to benefit some other gardener, or whether they all died of liver failure, I don’t know – let alone how the first two birds got the idea to come to the ground level and take up snail whacking.