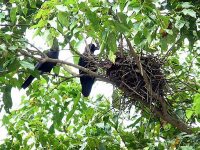 Last evening was the sixth day since the nest was built by a pair of House Crows (Corvus splendens) (see 1). A crow was seen hopping in and out of the nest every 5 minutes. Its mate was preening itself a few branches away. Just as the former settled itself in the nest, there was a commotion.

The time was about 7.30 pm, quite dark then. I could make out a large greyish bird perched on a lower branch, slowly and deliberately flapping its outstretched wings. Then I saw another bird a few branches away doing exactly the same. Suddenly both birds appeared above the nest and there was a flurry of wings and what looked like an attack on the nest. This was followed by loud cawing, giving the impression that a crow was hurt. I could not see clearly if there were 3 or 4 birds in that mad scramble around the nest. Just as suddenly, the attacking birds flew off leaving the nesting crow still mournfully cawing away.

There was another shorter attack 15 minutes later. Then 20 minutes later I noticed another bird flapping its wings on the lower branches, but no more raids.

I presume those grey birds must be female Asian Koels (Eudynamys scolopacea), for just before 7 pm a female was chased away by a watchful crow. Also at that time there were koels calling in the nearest of the distant trees.

Tonight it happened again at 7.25 pm!

A crow had just settled onto the nest; its mate had sat in during its 5 minutes break before flying away. A minute later two koels called, and when they were a few branches away the nesting crow flew out and chased them off. The crow cawed for its mate but it was nowhere in sight. Five minutes later a koel was again seen around the nest. Again the crow flew out to chase it away. A female koel suddenly landed on the nest, flapping its wings before it too was chased away.

Did it drop an egg?

The third attempt at the nest saw the koel crying out as it was attacked by the crow. The crow cawed again for its mate after the attack.

Tonight’s episode was not as dramatic as last night’s. All was dark and quiet by 7.45 pm.