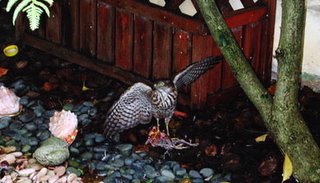 Because of the outbreaks of avian flu around the region, everyone is nervous when encountering a dead bird. Thus when John Lynn’s daughter saw a dead bird in her garden, she was naturally nervous and called her father at work.

Lying in what John described as his “bird friendly” garden was the carcass of a bird with its feathers scattered around. Its guts were missing. It must have been quite a sight to witness a bird butchered thus. The father pacified the daughter explaining that it must have been a “hawk kill” and not to worry about it.

A few moments later she again phoned John, this time in panic. Apparently the hunter had returned to finish off its prey. Sensing the unfolding of an exciting drama, he again pacified her and told her to get hold of the camera and record the event. This she did. The bird was very protective of its prey, spreading out its wings in anger when she got too near. It took an entire hour for the bird to finish off its prey, leaving nothing except feathers.

Although the jury is still out, the general agreement is that the bird is an accipitrid, either a juvenile Japanese Sparrowhawk (Accipiter gularis) or a Besra (A. virgatus), the latter being a rare migrant to Singapore.

These birds usually hunt small passerines, relying on the element of surprise to catch their preys. The bird may wait, hidden in a tree, to suddenly dart forth at a passing bird. It kills its prey mostly using its feet and talons.