Following Richard Hale’s contribution on Drunken Javan Mynas, I have managed to source out instances of other drunken birds as well as mammals and even insects. It would appear that humans are not the only species that is addicted to alcohol. 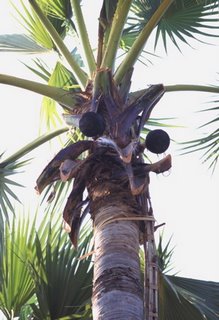 1. In many Southeast Asian countries palm inflorescences are tapped for a sweet drink that can be boiled down into palm sugar or fermented into toddy. These palms include coconut (Cocos nucifera), toddy (Borassus flabellifer) and fishtail (Caryota urens) palms. And it has been known for some time that Blue-crowned Hanging Parrots (Loriculus galgulus) regularly steal palm toddy from collecting pots placed over bound palm inflorescences, to become quite intoxicated afterwards. Lories have also been known to be addicted to palm toddy.

2. In February 2005 dozens of birds got drunk after eating holly berries (Ilex aquifolium) from trees found in an enclosed courtyard of a three-storey office building in Columbia, South Carolina, USA. After these Cedar Waxwings (Bombycilla cedrorum) feasted on the berries, many fell off branches while others crashed into the glass of the building and died. A local naturalist reported that these birds have a huge appetite, some even eating until they drop dead.

3. In Auckland, New Zealand comes a report that many kereru or New Zealand Pigeons (Hemiphaga novaeseelandiae) became drunk after eating fermented guavas. They fell out of trees and bumped into windows after become intoxicated. About 30 birds had to be rescued by staff from the Whangarei Native Bird Rescue Centre in June-July 2005 as they were vulnerable to predators like cats and dogs. It was reported that there was a shortage of food in the forest forcing the birds eating the guavas.

4. Clare Kines from the Arctic Bay in Canada, some 700 km north of the Arctic Circle, wrote to say that where he lives, Robins regularly got drunk on honeysuckle berries.

5.Mike of Santa Barbara, California, who posted Growing Up with California Condors in the current I and the Bird carnival, made an interesting comment to Richard Hale’s posting on drunken mynas:

“Many years ago in the western foothills of the California Sierra where apple orchards were common, I happened to be next to one talking to a friend. At that moment, a Robin walked out from underneath his pickup, eyed us and fell over on its side. ‘Don’t pay it no mind. It’ll be OK. It’s just drunk as a skunk. Look over there’ he gestured toward the orchard. That’s when I noticed that it was full of noisy, very wobbly Robins. The apples still on the trees had frozen and fermented as they thawed.

“Imagine, a bar room filled with drunks who could fly. They were singing, fighting, and missing branches by feet in their attempts to land. Occasionally, a bird would apparently just pass out and fall off a limb in the boneless drop of the truly whacked. Some had abandoned flight altogether and were weaving through the grass.

“It happens every so often when we get a frost before the pick’s finished. Robins are the worst. My wife says they must of Irish in another life. Tomorrow, it’ll be real quiet. Man could make a fortune off aspirin if those birds had money.”

6. It has been observed that if parrots get drunk, they become more talkative, only to stop talking altogether after they fall over. Smugglers of rare birds in Mexico regularly overdose their birds with tequila to quiet them when crossing the border into the US.

7. Elephants regularly gorge themselves with fermented fruits to end up drunk and not being able to walk straight.

8. Bumblebees, hornets and wasps lose their coordination after feeding on fermented fruits.

9. Margie Hall sent a report of a party of drunken elk in Sweden attacking an old people’s home. They had earlier feasted on fermenting apples. “I am sure many of us know how great cider (made from fermenting apples) tastes and can understand why the elks are addicted to them,” says Margie.

10. It seems that monkeys are just like humans in their drinking behaviour. At McGill University in Montreal, researchers fed Green Vervet Monkeys with alcohol and found that they could be classified into four categories: teetotaler, social drinker, steady drinker and binge drinker. Most were social drinker, indulging in moderation and only with other monkeys, and never before lunch. In a cage of these monkeys, they acted like they were in a cocktail party. One got aggressive, another became sexy, one was the clown of the party and another became the grumpy of the group. The binge drinker ended up on the floor. 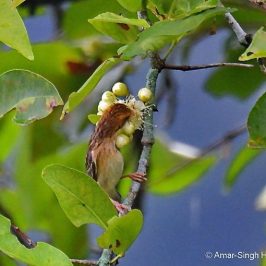 “I returned to this site today to do some follow up bird work. I again...

An account of various sunbirds attracted to the seeds of Macaranga bancana was posted earlier....