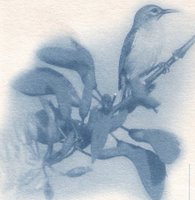 Sunbirds are small, hyper-active and highly colourful in the males but not the females. There are six species in Singapore, of which four can be regularly seen in the Sungei Buloh Wetland Reserve: Brown-throated (Anthreptes malacensis), Copper-throated (Nectariana calcostetha), Olive-backed (N. jugularis) and Crimson (Aethopyga siparaja). Of these, thekmost common is the Brown-throated. It is also the largest, with a body length of up to 139 mm and a weight of up to 14 g. The male is generally larger than the female in terms of both length and weight. The Crimson and the Olive-backed qualify as the smallest of the four. These two species share a common characteristic in that they exhibit an eclipse plumage in the males. This i3 essentially a short-term post-breeding plumage.

Now how many years do sunbirds live? Studies elsewhere have shown that certain species can live as long as 12 years. We at the reserve have been monitoring these birds by ringing studies for many years now. We have records of all the species except the Crimson, showing that they can live for at least 5 years.

Comment by Bird Specialist R Subaraj
Elsewhere in the world, regular long-term banding projects have proven invaluable in obtaining a wide spectrum of data about birds, including their life expectancy in the wild. In Singapore, the only regular long-term banding is carried out at Sungei Buloh Wetlands Reserve and as such, the only source for particular aspects of bird ecology here.

David Wells’ Malayan Bird Report of 1974-1975 discussed the subject of longevity of local birds. It mentions that based on continued ringing in Malaysia, Africa, tropical America and tropical Australia, tropical birds have a much longer lifespan, apparently several times, than similar-sized species in temperate areas. It is thought that the absence in the tropics of winter, with its seasonal collapse especially of arthropod populations, is directly or indirectly responsible for this.

The 1960s and 1970s were the “Golden Years” of bird ringing in Malaysia and Singapore and much data on longevity of local birds were collected. Wells’ report of that year further mentions that over a 17 year period (1959-1975), 46 resident birds were known to have survived for at least 5 years. The record then was held by an Olive-winged Bulbul (Pycnonotus plumosus) in Klang that was retrapped and released 157 months after it was first trapped and ringed!

On the topic of sunbirds, the 1974-1975 report mentions the retrapping of a Copper-throated Sunbird after 49 months and a Brown-throated Sunbird after 141 months! Will Sungei Buloh’s ringing programme break the record? Only time will tell, though much more importantly, the ringing programme will continue to amass a tremendous amount of truly vital data. Kudos to the dedicated team at our wetlands reserve! 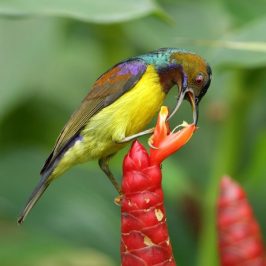