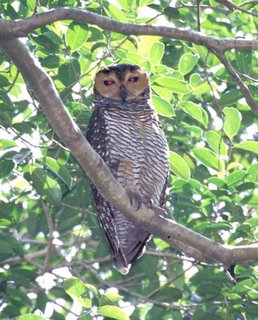 It was about 11 pm on the night of Wednesday 9th November. Timothy and myself were walking to our cars after a wonderful Taiwan porridge dinner. Suddenly a bigger than usual thing flew into a tree at the corner green, on the side of the Tian Hock Keng temple in Amoy Street-Boon Tat Street junction. It could not be a bat. As it stood in the tree, with the light in front of it, from silhouette, I recognised it as an owl.

Tim was walking away and I called him back to help identify the owl. He had a digital camera with him and so he went to take some shots. In that darkness and considering that the owl was quite high up, it was difficult to get a good shot. But I guess there were enough features in the picture for him to identify the owl later on. He identified it as a Spotted Wood-owl (Strix seloputo), confirmed later by R. Subaraj. Certainly a lifer for me!

Tim thinks that the owl was attracted to the dozen or more chicken feet spread out on a sheet on newspaper below the tree. However he would not hazard a guess why the chicken feet were there.

Wished I had a pair of binos kept in my car.

Victor Yue’s photos definitely showed a Spotted Wood-owl. I have received reports of a large owl, possibly of this species, seen in Marina South, which isn’t that far away. This would be the first confirmation of such an owl seen within the city limits. This owl is usually seen in forest-edge, open woodland, rural countryside and large parks and gardens. It has also been seen in Sentosa and at least one pair is resident in the Singapore Botanic Gardens and the surrounding areas. This is still an uncommon species in Singapore and not too many pairs are known.

In Malaysia this is an owl that has adapted to the oil palm plantations where it hunts the Malaysian Wood Rat (Rattus tiomanicus) that feeds on the oil palm fruits. Within our city there are three common rats that the owl could hunt – House Rat (Rattus rattus), Polynesian Rat (Rattus exulans) and the large Norway Rat (Rattus norvegicus). So far the only owl known to hunt within our city limits is the Barn Owl (Tyto alba).

Calvin Chang managed to photograph a Savanna Nightjar (Caprimulgus affinis) not in its usual pose,...

Natural cavities in trees are the most frequently used nest sites by owls. They also...