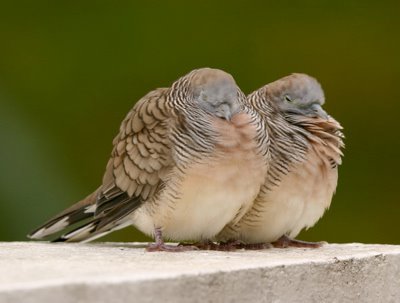 The family of three doves suddenly made their appearance on the 22nd October after an absence of nearly a month (see 18). They have since returned every morning for a week. At about 8am or a little later, sometimes announcing their presence with a series of cooing, they would be in my garden, foraging for seeds and possibly ants. They were always around the newly trimmed patch, moving together, never far from one another.

They appeared tame, allowing me to move close to about a metre away, sometime much less. They would stay in the garden for about two to three hours before one of them (possibly the adult) would fly off, soon followed by the other two. 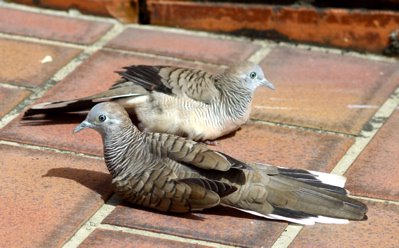 On one particular morning all three rested along the driveway, stretching their wings and relaxing in the sun, as if enjoying a hard earned rest after a period of foraging. They remained for about 5 minutes before moving to a higher location where all three sat and preened for another 15 minutes. Then suddenly they all flew off, making a soft, squishing sound.

It has been a week now and they have not returned. Will they make a surprise return? Or have the three gone on their separate ways? I suppose only time will tell!