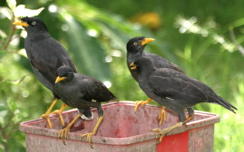 R. Subaraj recently shared with Richard Hale and myself an incident Kelvin K.P. Lim related to him years ago. I found it so interesting that I persuaded Kelvin to share his observation with us. For those of you who do not know Kelvin, he is the author of a number of Singapore Science Centre guide books on fishes, amphibians and reptiles.

“It was 9:10 am on the 7th of April, 1988. I was at the Kent Ridge NUS campus outside the then Zoology Department. I was walking in the car park when I noticed a single White-vented Myna (now Javan Myna, Acridotheres javanicus) on the grass verge nearby carefully picking up live kerengga ants (Oecophylla smaragdina) and placing them one at a time under its wings. Each time it did this, the bird went into a curious dance that involved flopping around on the grass with its wings outstretched and beak opened.

It gave me the impression that it was reacting (most likely in pain) to the bites inflicted by the ants under its wings. It looked like masochistic behaviour. It was possible that the formic acid secreted by the ants helped get rid of parasitic insects that were on its body.”

Since receiving his note, I found out that this phenomenon is known as “anting” and that at least 250 species of mainly songbirds have been recorded indulging in this behaviour.

To rid their feathers of bacteria and fungi that can cause damage, or even lice and other ecto-parasites, they place ants on their plumage. The formic acid given out by the ants does the work. There are also cases of birds using snails, beetles, wasps, millipedes and even discarded cigarette butts and orange peel for this purpose. Other birds lie or sit on an ant nest, wings spread, for the ants to crawl through their feathers.

Thanks to Kelvin, a new aspect of bird behaviour has opened up for the Bird Ecology Study Group to look into.

Anting has not been properly documented locally. Please keep an eye on this interesting behaviour when next you go out birding. 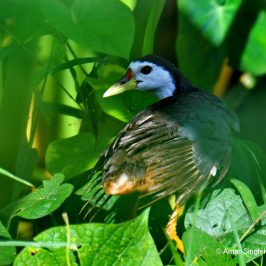