Excuse me, are you an Ornithologist?
– Ramblings of a Wannabe Bird Watcher

I am a plant watcher. In fact I am more than a plant watcher. I study plants and I write about plants. A few years ago I became interested in birds. The change came when birds visited the trees that I studied. At first I ignored them. Then I shooed them away. Finally I watched them. And I have been watching them on and off ever since. Does this make me a birdwatcher? In a way it does, for I do just that – watch the birds. So I am now a birdwatcher.

Is a birdwatcher also a birder? Does a person who simply watches birds automatically become a birder? To get an answer to this question, I trawled the net. As expected, I found my answer there. The definition of a birder is someone who participates in the recreation of field identification of birds. What this means is that he or she needs to go out in the field, either in a group or alone, to watch and identify the birds that are around. According to this definition I am a sometime-birder. Why? Well, I do not join in any of the bird watching outings offered by the Nature Society. I only enjoy the birds in the comfort of my garden and try very hard to identify them from the many bird guidebooks available. Am I an armchair birder then?

Birders most often become twichers. These are the people who get “uncontrollable spasms of excitement” whenever they spot a new species of bird. They are willing to travel long distances just to see rare birds first spotted by someone else. And they keep a score of the birds they see in a checklist. Twitchers can turn into “powerbirders” when they join in bird races and tally up as many species as they can in the duration of the race. Once in a while, a powerbirder turns into a bad apple when he or she becomes obsessed with winning and in the process adds on questionable species on to the list just to be ahead of the others. Of course this is not a conscious move but because of the over-confidence of the birder in question and the desperate need to win, a few questionable species are added. In such a case the team mates may just go along with the dubious identification “in the spirit of the sport.”

Being a sometime-birder, I am definitely not a twitcher or a powerbirder. New species do not excite me and so far I have yet to join in any bird race.

Most twitchers report their sightings to an official recorder and these are subsequently published in the bird group’s bulletin. Such entries are seldom accompanied with detailed notes or photographs. Fellow twitchers accept these records without problems but not ornithologists. The latter always have problems with unauthenticated records. However, once published, these records tend to be readily quoted and re-quoted by birdwatchers throughout the world. This may end up perpetuating any earlier errors. So where do we go from here?

Photograph is one answer. Photography has not always been a part of the local bird watching activities. During the last decade or so this has changed. Many of the local articles on breeding behaviour published in the Nature Watch, Nature Society (Singapore)’s flagship magazine have been written by avid photographers like Ong Kiem Sian, Raymond Poon, Jimmy Chew and Graeme Guy, rather than by birders per se.

The advent of affordable digital cameras and the marriage of this contraception with the binoculars and telescope resulting in a digiscope opened the door to better bird photography. Digiscopers are more and more helping to authenticate bird sightings. In the local scene a group of birdwatchers has formed a discussion group in the net called “Pigeon-Holes” whereby members report observations of bird behaviour, etc supported by photographic evidence. This obviously leaves traditional twitchers out in the cold.

The advancement of better and higher resolution digital cameras has greatly improved the quality of bird photographers. Professional single lens reflex (SLR) cameras are now available with high speed shooting performance. Some of the cameras available in the market have the capacity to shoot continuously at a high burst rate of more than eight frames per second and technology is fast improving in this direction. Obviously the cost of these modern machines are rocketing sky-high, but camera retail outlets have come to the rescue of the average photographers. Monthly payment is now available. Such cameras are also offering better and better resolution images that will soon match the resolution of photographic slides, it not already so. What all these means is that photographers are able to capture action shots of birds with a single pressing of the shutter button.

Who is an ornithologist?
We now come to the definition of an ornithologist. A professional ornithologist is obviously one who has a degree in zoology and is working on birds full time. But who are the amateur ornithologist? Although I personally watch birds and even have published a few articles on the breeding behaviour of birds, I am definitely not an ornithologist, even an amateur one at that. My articles are published in Nature Watch. Unfortunately this is only a popular magazine, not a scientific journal. Also, there is no peer review of the contents. Should I strive to be an ornithologist, I need to publish in any one of the many ornithological journals. For example, my articles need to be accepted by Forktail, the scientific journal of the Oriental Bird Club. Alternatively, I need to publish in Bird Conservation International, the journal of BirdLife International. However, if I my articles are accepted for publication in either BirdingASIA or World Birdwatch, the popular magazines of the two birding organizations respectively, this does not make me an ornithologist.

Let me elaborate further. The first post-colonial checklist of birds of Singapore was published in 1984 by the NSS’s Bird Group under the Chairmanship of Clive Briffett. This has subsequently been updated. Publishing a checklist does not make one an ornithologist. But having an annotated checklist accepted for publication by the British Ornithological Union after careful peer review by fellow ornithologists, is another matter altogether. Publishing a bird guidebook with photographic illustrations only proves that the author is an accomplished bird photographer. Whether the author in question can be considered an ornithologist will have to depend on other factors.

The formation of the Bird Ecology Study Group, with myself as one of the founder members, may tempt me to claim to be an ornithologist. But I will have to try to resist this temptation. I should be happy to remain a simple botanist. However, I will continue to publish more popular articles on bird ecology in Nature Watch and Birding Asia, but this is only because I wish to share my observations with the local as well as foreign birders. After all, the former is distributed locally while the latter is more widely distributed throughout the region. In sharing observations, we add on to the common knowledge of our local avian fauna. My other motive is to encourage more members to publish their observations. After all, there are plenty of new behavioural traits of our birds that are begging to be noticed and reported. And I am sure anyone who spends time observing bird behaviour is sure to uncover something that has not been reported before.

Birders should not be satisfied in just knowing our birds in name only. They should strive to learn more about them. Let us not just bird watch but behaviour watch as well. 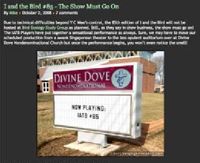